The 2017 Annual Report of the ERA-EDTA Registry [1] reveals that only a small fraction of patients accepted for renal replacement therapy are able to start this treatment with the best available therapy, which is transplantation, – and that the number of people who are in need of renal replacement therapy is rising. This poses a major challenge to our health systems, therefore everything should be done to fight this trend, e.g. by strengthening prevention.

The Registry’s 2017 Annual Report [1] shows that, out of nearly 700 million people, 88,453 individuals began renal replacement therapy (RRT) in 2017, which is a proportion of 127 per million people (pmp). The mean age of these patients starting RRT was 63.4 years, whereby roughly a fifth (17,935 patients) had diabetes mellitus as primary renal disease. The incidence rate varied considerably among countries – the Kosovo had an adjusted incidence rate of 429 pmp, Greece 223 pmp, France 174 pmp, Switzerland 99 pmp and Estonia only 68 pmp. These differences can be explained partly because of differences in national resources that are available for RRT. A large part, however, is caused by differences in general population health and availability of preventive measures between countries across Europe.

85% of all patients started RRT with hemodialysis, 11% peritoneal dialysis and only 4% received a transplant right at the start of RRT and could thereby avoid a period on dialysis.  “This is sad”, explains Professor Ron Gansevoort, Press Officer of the ERA-EDTA. “Kidney transplantation is the best renal replacement therapy from the medical point of view. Transplanted patients suffer from less comorbidities than dialysis patients and have a better outcome. Furthermore, transplanted patients experience a higher quality of life in general – with fewer complications and no need for strenuous treatment for more than four hours three days a week.” The main reason why patients cannot be transplanted right away is the scarcity of donor organs, which is dramatic in many European countries. “ERA-EDTA’s mission has always been to bring the best treatment to kidney patients. We therefore put a lot of effort into improving the situation. Together with EKHA (European Kidney Health Alliance), we have already addressed EU health policy and asked for a joint Pan-European information campaign. However, the results have been quite meagre so far.”

The small number of patients who receive a transplantation right away is not the only alarming fact revealed by the ERA-EDTA Registry data. “We also observe a rising incidence”, explains Professor Gansevoort. “In 2016, 121 pmp started renal replacement, in 2017 this number rose to 127 pmp.” The main reason is the demographic shift, the mean age of the general population is growing, and kidney diseases often occur in elderly people. “The risk of chronic kidney disease increases with age, so what we see here is not an abnormal development per se, but it is nevertheless a challenge we have to cope with. We have not seen an end to the demographic shift yet – people are still getting older.”

The number of patients in need of RRT will rise accordingly, too, thus posing a major challenge to our health systems: The annual costs per patient for hemodialysis (HD) are, for example, up to US$ 59,000 in Germany, US$ 84,000 in Belgium or US$ 71,000 in France [2]. Strengthening prevention strategies for kidney disease, therefore, is not only in the interest of each patient who might be saved from needing renal replacement therapy, but is also in the interest of policymakers. “It is high time that the focus is put on the rising incidence of end stage chronic kidney disease”, concludes Professor Gansevoort.

With more than 7,000 active members, the ERA-EDTA is one of the biggest nephrology associations worldwide leading European nephrology and one of the most important European Medical Associations. It organizes annual congresses and other educational and scientific activities, it produces guidelines, collects data and performs epidemiological studies through its Registry. It supports fellowships and educational/research projects through its committees and working groups. Its publications are NDT and CKJ (this last journal is Open Access). The ERA-EDTA also has an online journal: NDT-Educational. The 2020 Congress will be held on 6-9 June in Milan, Italy. 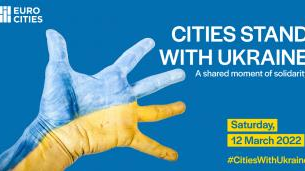 Cities stand with Ukraine: A shared moment of solidarity