Cristal champagne, go-go dancers and VIP rooms are only some of the amenities available to patrons of the new premiere bowling centers that are popping up.

Greasy burgers and league play have given way to martinis, mojitos and mingling singles, as an industry tries to rise above its blue-collar rep.

On a recent Friday night, Club 300 in New York City was jumping.

The disc jockey played the latest Jay-Z and Pharrell dance hits as orange, green and blue lights flashed from flat screens on the VIP lounge wall.

stockings and high-heel shoes danced on elevated platforms between the lanes. 10-pin lanes, that is.

It’s not how most people picture a bowling alley.

“We are a nightclub that just happens to have bowling lanes,” said Mark Ruffolo, assistant general manager at 300 New York, a “premier bowling center” at

Chelsea Piers in Manhattan. “It’s not a bowling alley; it’s a venue.”

Premier bowling centers such as Club 300 are reshaping notions of the beer and smoke-filled alleys of generations past. Part cocktail lounge, part bistro

and part nightclub, these stylish entertainment centers have opened in dozens of cities nationwide. National chains such as 300 and Lucky Strike and local

establishments such as RedPin in Oklahoma City cater to a young, trendy clientele, resurrecting interest–-albeit casual–-in a sport that has lost status

“I grew up bowling in the country, where it was serious–old men with the name-tags on teams,” said Sarah Rosenfeld while playing a game with friends at

300. “It smelled musty, like the Big Lebowski,” the 23-year-old from Pennsylvania Dutch Country said. “This is like a club.”

Named after the score of a perfect bowling game, 300 has other locations in Atlanta, Austin, Dallas, Long Island and San Jose. They are all big (60,000

square feet on average), upscale ($12 to $14 cocktails) and geared toward a young, hip crowd. “Strikingly different” is the chain’s slogan.

A man bowls at 300 New York beside a go-go dancer.
(Photo by Lawrence Delevingne)

A man bowls at 300 New York on a recent Friday night.
(Photo by Lawrence Delevingne)

Like other trendy bowling lounges, 300 New York is expensive. Beers cost as much as $8, lanes are between $8 and $12 per hour, shoe

The 35 or more premiere bowling centers that have opened during the last eight years represent less than 10 percent of approximately 5,500 American

alleys, but they are an important source of expansion in an American industry that is worth $6 billion.

“It’s a niche market. They go after an upscale crowd,” said Sandy Hansell, a top bowling-alley broker and industry expert. “They cater to a 21- to

Lucky Strike Lanes is the largest player in the upscale bowling market with 17 locations and at least one more planned. Lucky Strike Hollywood, the

Like all its “lounges,” Lucky Strike’s Washington, D.C., venue is known as much for its bar and dining as its bowling. Bouncers at the entrance turn away

people in baggy clothing and sports jerseys; patrons eat warm Brie and toast appetizers; and the work of emerging artists is displayed on the walls.

“It’s really good socially,” said Mahsa Saeedpour, a 26-year-old from Arlington, Va. “You can bowl, but you can get cocktails and the food is not greasy

bar food at all.”

She added, “You can make a whole night out of it.”

Like Lucky Strike, RedPin Restaurant and Bowling Lounge in Oklahoma City styles itself as the area’s “newest upscale entertainment experience.” Opened in

“It’s not at all like a traditional bowling alley,” said Jay Wolfe, RedPin’s general manager. “It’s a one-of-a-kind bar, lounge and restaurant.”

RedPin relies on casual bowlers, although Monday, Tuesday and Wednesday nights cater to league play on six of the venue’s 10 lanes.

bowled twice, according to the U.S. Bowling Congress, the sport’s national governing body. In 1979-1980, roughly nine million people bowled at least once a

lounges have mostly not joined organized teams. “But it gets people in the door.”

According to Hansell, the bowling broker, “boutique bowling,” another name for the upscale trend, is not the only driver of the bowling industry

“The majority of newly constructed facilities combine bowling with a range of other recreational activities,” according to a 2008 industry overview

While 300 fashions itself on a Friday and Saturday image, the chain does cater to other groups. On weekdays, companies hold functions and league bowlers

come in at night. Weekend daytimes are dominated by children’s birthday parities.

Most premiere bowling centers, however, are more focused on the adult lounge atmosphere. A television commercial for 300 New York sums up the culture of

“It’s not an upscale club or a trendy bar or even a hot new bistro. It’s all that and more rolled into one incredible place,” the sexy female voice says

over images of a young woman walking down a red carpet, through a chic bar and restaurant, and finally ditching her heels for a pair of red and black bowling 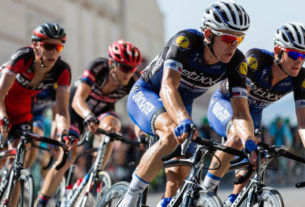 HAUPPAUGE INTRODUCES THE MYSMARTHOME LIGHTING STARTER KIT. DESIGNED TO FOR DYI INSTALLATION, IT WILL SAVE ENERGY AND COST ON HOME LIGHTING