Skip to content
Nigeria officially welcomed Great Britain’s Queen Elizabeth II and Prince Philip with open arms, but ordinary Nigerians expressed doubts over whether this week’s state visit would have positive implications for them.
The Queen of England, Elizabeth II, arrived in Africa’s most populous country on Wednesday, greeted by two twins who had presented flowers to her more than 40 years ago. She spent the first of her four-day visit performing functions which would be remembered for years to come.
For instance, the head of the House of Windsor – the British Royal Family’s official name – planted a tree at the Millennium Park in Abuja before visiting Nasarawa State.
Also on Thursday, the British monarch had lunch with Commonwealth heads, before meeting Nigerian monarchs in a separate reception.
Most Nigerian citizens were left out of the visit of the former colonial head of the country, and they have kicked against the visit, calling it another jamboree.
Despite the fact Nigerians not only respect the Queen, but revere her, the country’s problems with economic hardship and the inability of its federal government to make life meaningful for the ordinary Nigeria, sparked criticism during her visit.
In another engagement, the Duke of Edinburgh, Prince Philip was received separately in Nigeria’s commercial capital, Lagos.
Sporting a grey suit with a cream bowler hat, he came in from the capital Abuja amidst tight security.
The presidential wing of the Murtala Mohammed International Airport Ikeja in Lagos came alive as the Duke touched down to begin his tour of the city, with the Lagos State Governor, Ahmed Bola Tinubu, his wife Oluremi and other top government functionaries as his guides.
The Duke created a mild drama when he politely rejected the Limousine car provided for him by the presidency. Rather, he preferred to ride in the diplomatic Jeep 138c 001 provided by the British Deputy High Commission in Lagos.
Speaking to journalists, the Lagos Governor, Bola Ahmed Tinubu said the Duke’s visit to Lagos was one of the best things that has happen in his administration and in Nigerian democracy.
According to the Lagos State Governor, the visit is one of the most positive developments for the country since 1995, adding it is a sign of good things to happen in Nigeria.
"I feel delighted about the Duke coming to Nigeria and Lagos. It is my most memorable experience after 47 years," the governor said.
The Duke was expected to commission a number of projects in Lagos before returning to Abuja at a reception held in his honour by the British Council.
Manoeuvring through Lagos traffic for hours, the Duke of Edinburgh surrendered to traffic jam within the state, saying it was hell.
Indeed, the Duke confessed it was only thanks to the help of the police who blared their sirens and physically chased other vehicles off the road, that he was able to arrive at the reception.
The Duke said: "I would not have got here if not for the assistance of the police, even if I had left for it yesterday from the airport.
Prince Philip commended the efforts of the Nigerian police in ensuring his safety throughout the trip.
He urged Nigerians to adhere strictly to policies and regulations of the federal government as a way of ensuring development of the socio-economic aspect of the country.
He likened the country’s socio-political environment in its current form to a football match in which every side had to abide by the rules of the game and the dictates of the referee. 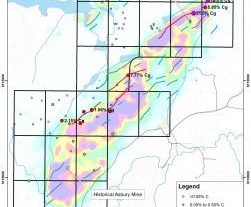 CANADA CARBON REPORTS ITS PROSPECTING RESULTS ON THE ASBURY PROPERTY