Skyharbour Resources Ltd.’s (TSX-V: SYH) (OTCQB: SYHBF) (Frankfurt: SC1P) (the “Company”) is pleased to announce the closing of the previously reported Option Agreement with Rio Tinto Exploration Canada Inc. (“RTEC”), a wholly owned subsidiary of Rio Tinto Limited (“Rio Tinto”), to acquire up to 100% of the Russell Lake Uranium Project (the “Property” or “Project”), which comprises 26 claims covering 73,294 hectares of prospective exploration ground strategically situated between the Company’s Moore Uranium project (to the east) and Denison Mines’ Wheeler River project (to the west) in the eastern portion of the Athabasca Basin.

The Project is a premier, advanced-stage exploration property given its large size, proximity to critical regional infrastructure, and the significant amount of historical exploration carried out on the property, which has identified numerous prospective target areas and several high-grade uranium showings as well as drill hole intercepts. The Property is centrally located between Cameco Corp.’s Key Lake mill to the south and McArthur River mine to the north. Access to the Property is via Highway 914, which services the McArthur River Mine and runs through the western extent of Property along with a high-voltage powerline that energizes the existing mining operations in the eastern portion of the Athabasca Basin.

Skyharbour has filed an NI 43-101 Technical Report on the Russell Lake property written by Michelle McKeough, P.Geo., of TerraLogic Exploration Inc. The Technical Report is the culmination of previously reported and compiled historical data and geological reports and was commissioned in preparation for an upcoming drill program Skyharbour plans to carry out on the project. It provides a detailed description of the project including the historical exploration and drill results previously reported, as well as recommendations for future exploration programs. The Technical Report may be found under the Company’s profile at www.sedar.com.

The Russell Lake Project is a large, advanced-stage uranium exploration property totalling 73,294 hectares strategically located between Cameco’s Key Lake and McArthur River Projects and adjoining Denison’s Wheeler River Project to the west and Skyharbour’s Moore Uranium Project to the east. Highway 914, which services the McArthur River mine, runs through the western extent of the Property and greatly enhances accessibility. Similarly, a high-voltage powerline situated alongside Highway 914. Skyharbour’s acquisition of Russell Lake creates a large, nearly contiguous block of highly prospective uranium claims totalling 108,999 hectares between the Russell Lake and the Moore uranium projects.

There has been a meaningful amount of historical exploration carried out at Russell Lake but with most of it conducted prior to 2010. The Property has been the subject of over 95,000 metres of drilling in over 230 drill holes. The Property’s claims are in good standing for 2-22 years with assessment credits built-up from previous programs.

Several notable exploration targets exist on the property including the Grayling Zone, the M-Zone Extension target, the Little Man Lake target, the Christie Lake target, and the Fox Lake Trail target. More than 35 kilometres of largely untested prospective conductors in areas of low magnetic intensity exist on the Property as well.

At the Grayling Zone, drilling of the 2,200 metres long, up to 100 metres thick sub-parallel Grayling conductor intersected an 800 metres long discontinuous zone of basement-hosted uranium mineralization with localized perched and unconformity-hosted associated mineralization along a graphitic thrust fault. Drill hole RL-85-07 intersected 3.45% U3O8 over 0.3 metres at a depth of 363.2 metres and 0.1% U3O8 over 0.5m at a depth of 366.4 metres. This target is prospective for additional high-grade uranium discoveries and is open in several directions.

At the M-Zone Extension target, historical drilling at neighbouring Denison’s M-Zone along trend from the Grayling Zone intersected basement hosted uranium of 0.70% U3O8­ over 5.8 metres at a depth of 374.0 metres. Like the Grayling Zone, the mineralization is hosted by a graphitic thrust fault. The northeast extension of the M-Zone-Grayling corridor onto the Property has seen limited drilling, but mineralization was intersected in historical drilling, returning 0.7 metres of 0.123% U­3O8 at 619.1 metres depth in hole MZE-11-03.

The Little Man Lake Zone target is 500 metres long, 10 to 15 metres thick, 25 to 35 metres wide, and is a zone of prospective geology associated with an unconformity depression. The last drilling in this area was in 1989, prior to modern uranium exploration models, with historical uranium grades ranging from 0.03% up to 0.1% U3O8 at around 300 metres depth.

In addition to the aforementioned target areas, there are more than 35 kilometres of untested conductors on the Property underlain by rocks of low magnetic intensity, suggestive of prospective graphitic meta-pelitic basement rocks. The Project has seen limited exploration in the previous twelve years, so minimal modern exploration techniques and methods have been used to expand existing zones of mineralization as well as to make new discoveries.

There is a fully permitted exploration camp on the Project suitable for over forty people located on the highway and within 5 kilometres of Denison’s Phoenix deposit. Skyharbour is planning an initial phase of exploration and drilling at the Project with details forthcoming.

Under the terms of the Option Agreement, which now has TSX Venture Exchange (the “Exchange”) approval, Skyharbour may acquire up to a 100% interest in the Russell Lake Uranium Project and will become operator of the Project during the earn-in period and afterwards if a joint venture is formed.

An initial majority 51% interest in the Property may be earned by paying CAD $508,200, which has been paid, and issuing 3,584,014 common shares of Skyharbour, which has been issued, to RTEC. Skyharbour must also fund CAD $5,717,250 in exploration expenditures, inclusive of a 10% management fee to Skyharbour, over a period of three years, of which a total of CAD $1,905,750 must be spent within eighteen months. Skyharbour at this point can elect to enter into a 51% / 49% joint venture with RTEC subject to a standard dilution clause, or the Company can earn additional interest in the project.

Skyharbour may then acquire an additional 19% to earn a total of a 70% interest in the Property by paying CAD $1,588,125 in cash or by issuing 2,226,096 shares. Additionally, Skyharbour must fund CAD $6,352,500 in exploration expenditures, inclusive of a 10% management fee to Skyharbour, over a period of the following two years.

Upon Skyharbour earning a 70% interest, the Company may elect to continue on a 70% / 30% joint venture basis, subject to a standard dilution clause, or it may acquire the remaining 30%, if RTEC elects not to contribute, for a total undivided interest of 100% of the Property by paying CAD $33,033,000 in cash or by issuing 42,598,565 shares or a combination thereof to prevent RTEC from owning over 19.9% of Skyharbour.

Upon Skyharbour’s 100% acquisition, the Property will become subject to a 1% NSR Royalty payable to RTEC. The royalty may be reduced to 0.5% by payment of USD $750,000 to RTEC. The claims comprising the Property are subject to various existing underlying royalties to other parties. All securities issued in connection with the Option will be subject to a hold period ending four months and one day after issuance.

The technical information in this news has been prepared in accordance with the Canadian regulatory requirements set out in National Instrument 43-101 and reviewed and approved by David Billard, P.Geo., a Consulting Geologist for Skyharbour as well as a Qualified Person.

Rio Tinto is one of the largest mining and metals companies globally, operating in 35 countries with over 49,000 employees. Rio Tinto’s purpose is to produce materials essential to human progress.

Skyharbour holds an extensive portfolio of uranium exploration projects in Canada’s Athabasca Basin and is well positioned to benefit from improving uranium market fundamentals with fifteen projects, ten of which are drill-ready, covering over 450,000 hectares of land. Skyharbour has acquired from Denison Mines, a large strategic shareholder of the Company, a 100% interest in the Moore Uranium Project which is located 15 kilometres east of Denison’s Wheeler River project and 39 kilometres south of Cameco’s McArthur River uranium mine. Moore is an advanced-stage uranium exploration property with high-grade uranium mineralization at the Maverick Zone that returned drill results of up to 6.0% U3O8 over 5.9 metres including 20.8% U3O8 over 1.5 metres at a vertical depth of 265 metres. Adjacent to the Moore Uranium Project is Skyharbour’s recently optioned Russell Lake Uranium Project from Rio Tinto, which hosts historical high-grade drill intercepts over a large property area with robust exploration upside potential. The Company is actively advancing these projects through exploration and drill programs. 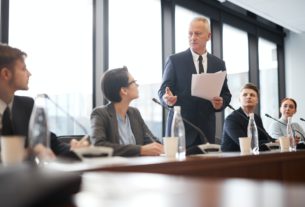